Phone Us
Shopping Basket
Your Cart is Empty!

Passing your driving test first time is not always best

M otorists who pass their driving test second time round are the safest on the roads, according to recent studies. 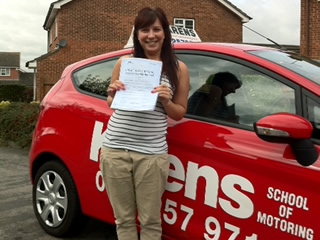 Researchers found those who pass on their second attempt have fewer points on their licence, are less likely to suffer road rage or be stopped by police.

Obviously most people look to pass a driving test first time for financial and bragging rights although the study concluded, first time passers know how to handle a car but some might be over-confident and that can quickly lead to recklessness.

Worryingly, the research found that those who took more than two attempts to pass have more bad driving habits.

Drivers who need a dismal four, five or six efforts before making the grade have the worst record behind the wheel.

Interestingly, men are also more likely to pass first time with less than 54 per cent needing another attempt, while 57 per cent of women have to take a second test, suggesting women are better drivers.

Intensive driving courses can reduce the amount of time it takes to pass but even then it seems people wait until they are older to begin training.

It's estimated that the average cost of a single driving lesson is now over £25, and a candidate has 45 lessons before taking a test, meaning the standard bill for learning to drive is well over £1220 when including test fees.

Some people have decided to save money and take lessons from parents and other relations.

Although this is not always a good combination and can mean that people have to spend a lot more as they do not get the right training and end up having to take more tests and pay for more lessons.

Researchers also found that women are most likely to suffer with their nerves with 92 per cent saying they were terrified before their test, compared to just 78 per cent of men.

Twenty-seven per cent of girls were so nervous, they kept apologising to the examiner throughout the test.

It should be noted that pass rates are influenced by various factors, and there will inevitably be some variation between gender and ability of drivers.

Passing your driving test first time is not always best

How to cut the cost of learning to drive

Changes to the Driving Theory Test